How many times have you heard this phrase “the trend is your friend”? Yeah, it can be your friend all right  – until it turns on you! Trends are great (especially for us retail Forex traders because that’s where we make our money), but for those of us new to the business they can be a bit hard to identify as they develop. And even when we identify a nice trend, should we jump in the market or wait a while? Let me share some of my thoughts on this in today’s column.

Once again, I’ll refer back to Investopedia for the proper definition of a trend line, which is “a line drawn over pivot highs or under pivot lows to show the prevailing direction of price”. But if we are staring at a blank chart, it is indeed helpful to have a good idea as to where we should start drawing or trendlines if we wish to be successful in forecasting price action. Let’s look at a chart of EUR/USD: 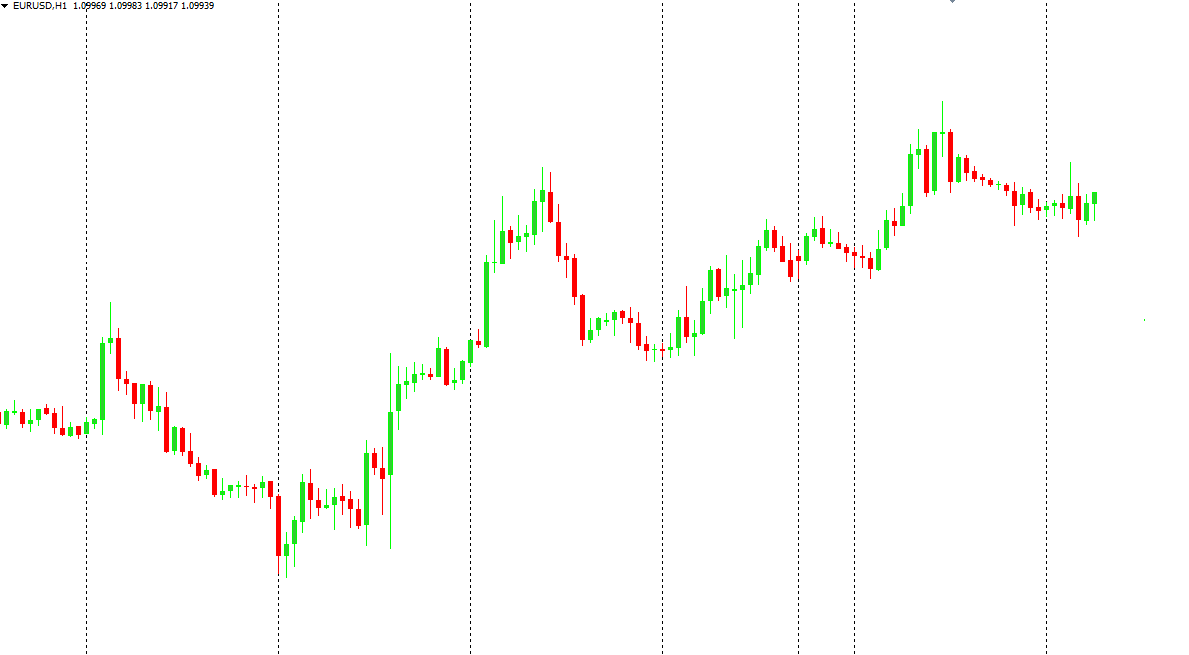 This is a one hour chart that has, for the most part, fairly nice price action trending over several days (the black dotted lines represent day separators). As you can see, there are lots of opportunities for drawing trendlines. For the purpose of this discussion, I’m going to share with you something very useful that I have learned about drawing effective trendlines: what we are going to do is draw upward trend lines from troughs and downward trend lines from peaks. Let’s look at the chart above with a couple of trend lines drawn on it: 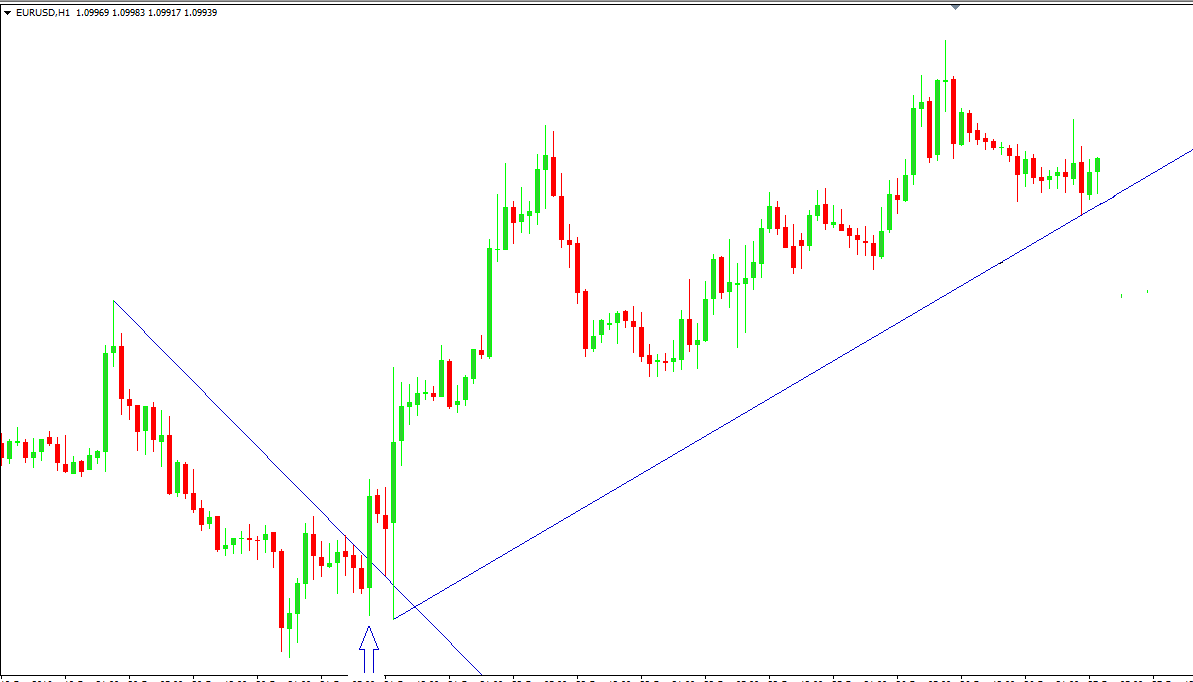 Look at the downward trend line on the lower left of the chart. It’s drawn from a pair of significant highs (the high of the green pin bar on the left and the first of the series of three red candles on the right). Notice how price action respects the line: for several hours it never got near it, and then, as it started to approach the trend line, it was pushed down, culminating in three hours of price action touching the line and being pushed down again. On the fourth hour (the green candle pointed at by the blue arrow), price action still continued to move down for a time, but this time, the candle closed above that trend line. And look what happened – for the next 91 hours, price action maintained a steady and very strong trend to the upside. From the breakout point (where the breakout candle crossed the trend line) to the price action high was 130 pips – that’s certainly nothing to sneeze at, especially on EUR/USD! Also notice that the second bear candle after the breakout touches the trend line (which was resistance, but now is support) and bounces off. For

Now let’s look at the second trend line, the uptrend. We see that it is drawn from a pair of swing low troughs, and once again shows how the market respected that line (even though we really couldn’t see it for a while as the candles were forming). That’s one of the things trend lines will demonstrate: an area of support and resistance. One of the things we look for in regard to support and resistance, is a breakout (remember the green candle above the blue arrow in the chart above?). What happens to price action when we observe a candle close below the trend line we just drawn? Let’s see what happened: 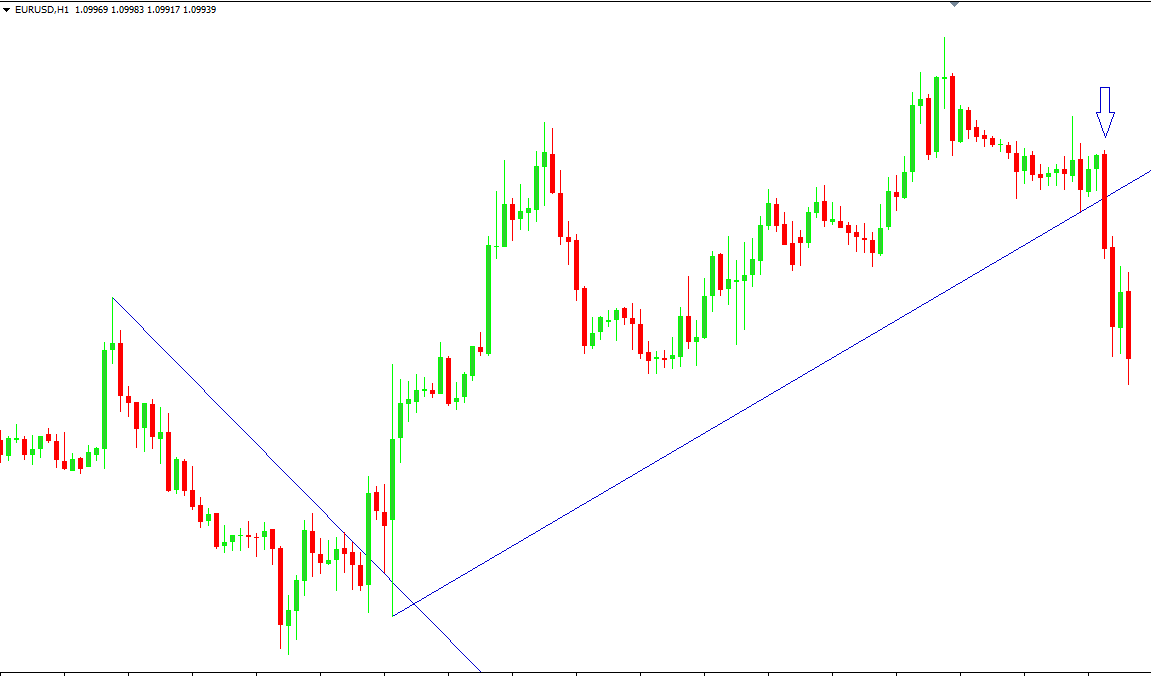 We see that the first candle at significantly closed below this trend line signaled a strong downward move, so if we were properly prepared, we would have had a pending order sitting below that line waiting for the coming downtrend, or we would have been ready to enter a market order at the close of the bear candle indicated by the blue arrow. Anticipating this move was worth a little over 30 pips if one entered a trade at the close of the breakout candle.

Now I purposefully kept today’s column a bit on the short side because you don’t need to be wasting too much time reading this; what you need to do now is pull up a chart and practice drawing some trendlines, and then practice some more and while you are doing that you should be looking for two things: how price action respects the trend lines you draw, and the eventual breakout (where the trend line is violated). In part two, I will be discussing sub trend lines, as well as some other interesting things you can do with trend line drawing. Until then, have fun practicing your trendlines, and good luck in the market! 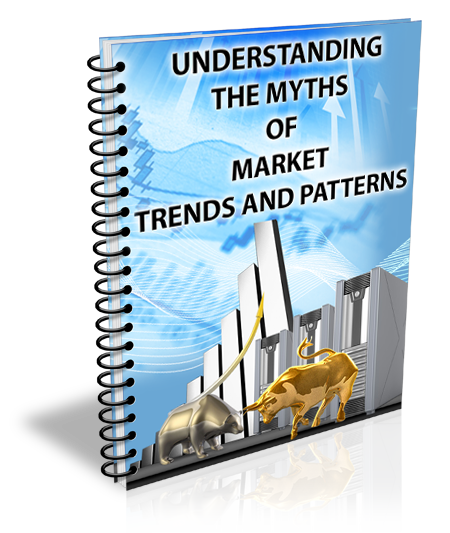 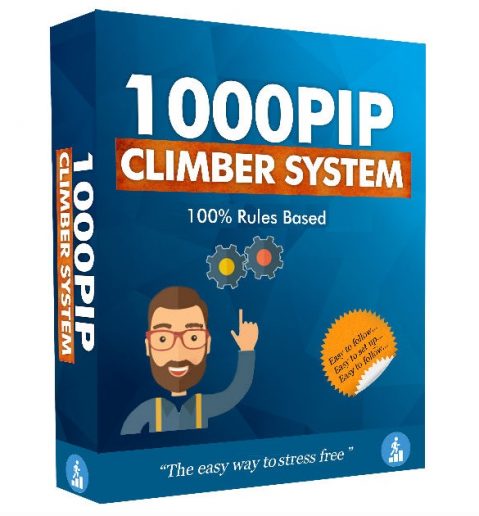 Prediction & Analysis May 7, 2017 and Updates for Members

Hello everyone! Last week was another solid one in the room! Members: Pure Price Action Series - CLICK HERE to...